It is a self-service business analytics and data visualization tool, anybody can use it. From creating charts, reports, formatting them, Differentiate Tableau Server and Desktop. Putting them together as dashboard all has been done on Tableau Desktop. All your development is done in the Tableau Desktop. You can perform all queries without using single line of code. To know the difference between Tableau Server and Desktop read this whole blog.

Tableau Server provides high security to your data and it can help you insert with live interactions dashboard. In truth it is the most secure way to transfer the Tableau worksheets.

Tableau reaches self-service capabilities for your company, you want it, do one thing i.e. you need to connect it to your environment. While Tableau Server and Tableau Desktop meet capabilities of end-user development. They are some slight difference.

When is it time to bring in Tableau Server? 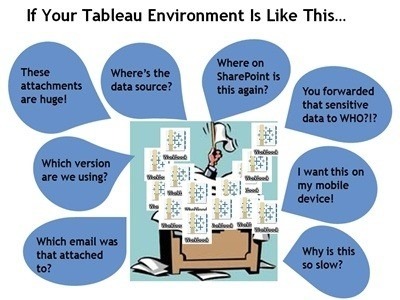 Tableau Server is a sharing tool, it can be used to share data with high security. Just we know two scenarios why we need Tableau server.

Suppose you have a highly controlled environment and high growth- if you want more collaboration, governance, security, and performance.

Equally If you want to create a data visualization for any organization Tableau Server is helpful to this requirement. Tableau Server is a fully secured. As a matter of fact It safely distributes interactive data in web or websites. Therefore It Depends on the core licensing the price of Tableau Server will decide.

Difference between the products falls into these categories:

Functionality in the authoring environment

In Tableau Server we can publish and maintain metadata and data source thereby creating a "single source of the truth." In the same fashion Tableau Desktop when we maintain data source all users, we can maintain their own copies of the data and metadata- we get different answers from the same query.

In Tableau Server, 10.x users can edit, publish and create workbooks without the use of Tableau Desktop. However these workbooks can modified and shared by authorized users. By using Tableau Server we can combine workbooks, data sources, and dashboard under one project and centrally managed. In the same way, remove the error-prone method of emailing links and workbooks.

Generally Tableau Server used to publish content and help to protect sensitive data. Not to mention in addition Administrators put down users permissions on workbooks, data sources, projects, and views.

Users can create device-specific layouts for iPad, Android, and iPhone in Tableau Desktop. Meanwhile In Tableau Server when the dashboard is published users can interact, view and subscribe to the dashboard, Generally it will supply differently for each and every specific device. As result It allows for the content creation and editing on an iPad.

Functionality in the authoring environment:

We can publish new data source only from Tableau Desktop.

Finally Tableau Server is a less expensive option for 80% on the side of Tableau workbook developers. Remaining 20% of the developers modify and add data source they require Tableau Desktop license. In like manner for most of the users, Tableau Server is sufficient. I hope you guys get some clarity about the difference between Tableau Server and Desktop.

Anybody can learn tableau if you have a technical degree with basic coding knowledge. Trainers of OnlineITGuru will teach every topic they are real-time experts. Get more Knowledge, join OnlineITGuru for mastering the Tableau Online training