Hadoop is a open source distributed file system for processing large volumes of data in a sequential manner. But with this sequential manner, if the user want to fetch the data from the last but one row, he need to search the all the rows from the top. It can be done when the data small, but if the data is large it take more time to fetch and process that particular data. To overcome this problem, we need a solution, HBase can provide solution for it .

HBase is a open source, highly distributed NO Sql, column oriented database built on the top of Hadoop for processing large volumes of data in random order.   One can store data in HDFS either directly or through HDFS. HBase sits on the top of Hadoop system to provide read write access to the users. Data consumers can read/ access the data randomly through HBase.

In HBase, tables were split into regions and are served by region servers.  Regions were vertically divided by column families into stores. Stores contains these files in HDFS.

HBase contains three major components namely Master server, client library and Region server. Region servers can be added or removed as per requirements.   Let us  discuss its architecture in detail.

Assigns regions to the regions servers and takes the help of Apache Zoo keeper for this  task. Below are the  responsibilities  of Master Server:

It monitors all the regions server instances in the  cluster

It is an interface for creating , inserting and  updating the  tables  in the  Data  base. 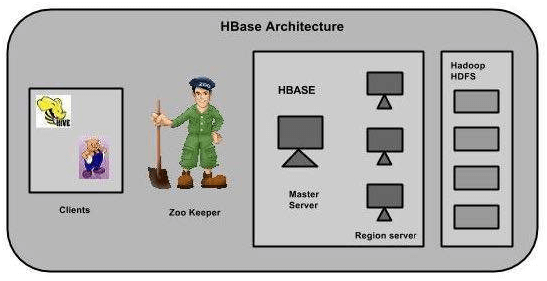 Generally Hbase tables are divided horizontally by row key range into regions . A regions contains all rows in the  table  between regions start key and  end key   These   region server   contains regions that   has following   responsibilities:

Region server communicates with the client and handle data related operations. Handles read and write request for all the regions under it. Decide the size of the region following the region size thresholds. 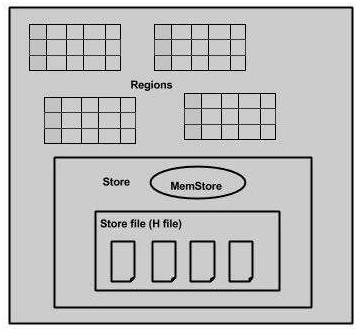 HBase comes with out of box integration for  with Map Reduce Concept. To illustrate It also  optimized for sequential scans and read  , which makes well suited for batch analysis of log data.

Many organizations have turned to Hbase  for operational data store to capture various real time metrics from  their applications and servers. Its column oriented data model makes Hbase a natural fit for persisting  these values.

Strong Consistency: In particular this project has made strong consistency of reads and writes. At the same time a single server in an HBase cluster is responsible for subset of data and with atomic row operations to ensure consistency.

Failure Detection:   Especially When the node fails, Moreover HBase automatically recovers the write in progress and edits that have not flushed.  In addition It reassigns the region server that was handling the data set , where  the node failed.

Generally It used, whenever there is a need to write heavy applications.For instance It used, whenever you need to provide fast random access to available data.Recommended Audience :Software developersETL  developersProject ManagersTeam Lead’sBusiness Analyst