Hive is a data warehouse Software built on the top of Hadoop for query, Data Summary and analysis. It is an SQL like interface to query data stored in the form of data bases  and the file systems  that integrate with Hadoop.  Hive provides necessary SQL abstraction to integrate queries like HIVE SQL which does the w queries with lower level of API. Since many of the data ware housing  application works with  SQL based querying  languages , Hive has a feature of portability of SQL – based application to hadoop.

The architecture of Hive is shown below. Let us discuss them  each in detail. 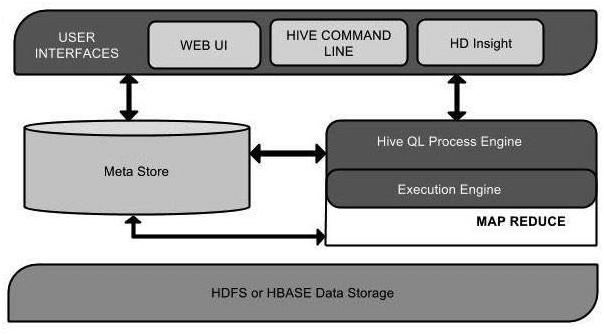 Meta Store:  Schema or Meta data of tables, data bases, columns and HDFS mapping were stored in the data base servers by Hive. It contains partition of meta data which helps the driver to track the progress of various data sets distributed over the cluster. The data is stored in RDBMS Format .

Execution Engine :  It is the common part of  Map Reduce  and HiveQL process Engine . It process the query and generates the results same as  Map Reduce .

HBASE : These are the data storage techniques to store data into the file system.

Based on SQL, Hive SQL does not strictly follow Full SQL -92 Standard . It offers a extensions that are not in SQL which includes Multi table inserts and create table as select , but this offers only the basic support for indexes .It lacks the support for  materialized views and transactions . It support for INSERT , Update .  The storage and querying operations of Hive closely resemble to the data bases while SQL is  Language . A schema applied to a table in traditional data bases .

For those data bases ,  the table typically enforces the schema when data loaded into the table . This enables the data bases  to ensure that data entered follows the representation of the table  as specified in the table definition. This design is called Schema on Write . Hive does not  verify the data against the table schema on write . But it checks for the run time  checks  when the data is read .This is called Schema on Read.  Quality checks were performed  against the data  at the load time to ensure  for the data  corruption. Early detection corruption  ensures early exception handling .

In Hive, tables and Databases created first  and then data loaded into the tables.

While dealing with structured data, it has a Feature of UDF where the Map Framework doesn’t have

Provides  enhanced performance  when compared to slow Map – Reduce JobsReduce the development time by  eliminating the MAP Reduce CodeProvides object level security and  enterprise level security so that only authorized persons can access the data .HIVE ensures Data integrity by providing complete ACID transaction Support.Recommended Audience :Software developersETL  developersProject ManagersTeam Lead’sPrerequires :  There is nothing much  prerequisite for learning Big Data Hadoop .Its good to have a knowledge on  some  OOPs Concepts . But it is not mandatory .Our Trainers  will teach you if you don’t have a knowledge on  those OOPs ConceptsMaster in Hadoop from OnlineITGuru through Big Data Hadoop online  course