DataStage is a data integration component to IBM Infosphere Information Server. Data delivered in data warehouses real time web servers and messaging systems, data marts, and operational data stores and provides graphical framework to develop data from source systems to target systems .DataStage is another application in the server to connect to data sources and targets to transform data, they move the application DataStage is ETL tool initials standing for extract, can execute in single server.

DataStage Client and Server Architecture: DataStage consists of client-server Architecture and Client based administration that has Design, and Operational tools used to access a server based data integration capabilities by the common services tier. In the below figure Client Architecture shows that ionosphere DataStage user interface tier.

DataStage and Quality Administrator: In Graphical user interface is used on administration task for setting into IBM InfoSphere Server Information, users such as creating, logging, and moving the projects to criteria on purging records.

DataStage and QualityStage TM Designer: Design interface is used to create Datastage applications and transformation, which is an integral part on quality data specifies in data sources and required transformations for the destination to data. Jobs are created for executable to schedule by DataStage and QualityStage Designer. It runs in the IBM InfoSphere information Server engine. Client designer writes development on metadata for the dynamic repository compiled during the execution data which is required to deployment and write in a metadata repository. 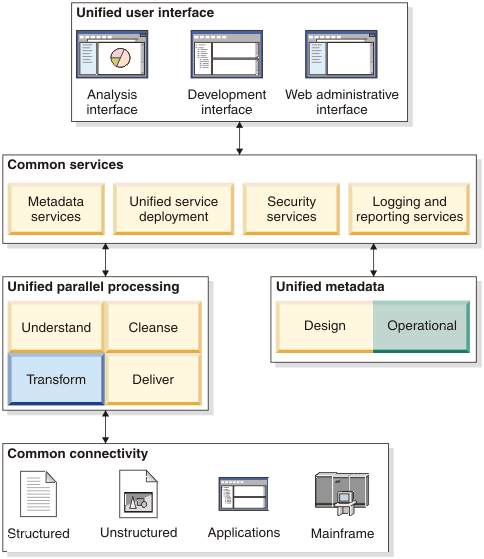 Common Repository: As a result It provides the following types of metadata required to support DataStage:

Design metadata: It consists design time metadata is created through the DataStage and QualityStage Designer and information Analyzer.

Operational metadata: In addition It contains metadata for the operational history of integration process to run the time and date of events and parameter are used.

Common Connectors: Generally It provides connectivity for a large number of external resources to access the common repository from processing engine, and the data source supported by InfoSphere information Server used for input or output.

What are DataStage Components?

Manager: The main interface for the Repository of DataStage used for storage and management of reusable Metadata by the DataStage Manager. He will observe and edit the content on Repository.

Designer: In the designer, the interface used to create the DataStage applications or jobs and specifies the data source for required transformation to destination of data jobs. Simultaneously they created executable to compile by the schedule through the director and run by the server.

Administrator: Administrator is used for to perform tasks and includes DataStage users for setting up creating and moving projects.

Director: Generally It consists of executing and monitoring Datastage server jobs and parallel jobs.Get in touch with OnlineItguru and mastering in Datastage and it is a online training.

What would be the future on DataStage

In Fact DataStage has a bright future. But high versions in DataStage are more expensive on maintainer to a process of extracting, transforming. And loading meaningful data into the data warehouse. At the same time known as significant since this data processed in further. And analyzed for considerable business intelligence to determine success in business purpose.Therefore ETL tools getting more popular and previously used for mostly on data warehousing. Now also used for several other types of data-intensive tasks like data export, data migration. As a result Rules-based data processing and this trend continued to increase the business by using an ETL tool.

Specifically It is a basic course for ETL developers and project administrator’s responsible for transformation and data extractions.