It is nothing surprising to say that we do not live without internet. It is becoming a common mode of our communication.  Today 80 % of the mobile were smart. All these smartphones support internet. For all the things that we need to know in the internet, we need we need to take the support of the browser. If the application  (or) website developed, it would not be launched immediately. It needs to undergo the testing phase and then the website launched. During this testing phase, the tester uses different commands for the purpose of validation. Do you want to know what commands used by the tester? Read the complete article to know the commands of selenium automation tool.

Get more information on selenium from OnlineITGuru through Selenium Online Training Hyderabad.

Even in this 21st century, we were back w.r.t to automation. testing of the front end applications is being done manually in these days.   The manual testers use the code like java. But today we have many tools like Quick test pro (QTP), and Selenium IDE which were the most popularly used testers for most of the automated web applications.  This is used because many tools used the concept of record and playback approach.

The advantage of this approach is it captures the screen of the user and then simply playbacks those actions at the time of requirement. It means it just the same repetitive action for certain part of the code, but it does not work for all the time. If the cursor move changes at run-time the recorded action fails.  So we need an alternative to this.  One of the alternatives is using commands.   Have a glance below to know the commands of selenium automation tool.

Moreover, language (or) environment another feature to perform validation of web applications to be tested. But this scripting introduces an additional level of complexity in the project, where the testers need to strive a lot regarding the new scripting language.

This selenium was initially started in 2004 as a JAVA script library that allows the interaction with a web page. Since it was based on java script, it is possible to run the library across multiple browsers. Hence  JavaScript becomes an essential part of selenium, Selenium Remote control (RC), and Selenium IDE. So the browsers that bases on JavaScript the library is not able to provide a comprehensive toolkit for testing.

With the intention of communicating with the browsers directly that overcomes some of the drawbacks of selenium google started working a project named web driver. One thing to noted here Selenium IDE a part of selenium 1 and supported by selenium. It is a Firefox plugin that provides an easy –to use interface for automated tests. This Selenium IDE has a recording feature which records the user actions as they performed. The recorded actions can used for later executions.

test suites usually combine the API with any of the programming languages. Using selenium API we can control the actions of the browser. One of the best news regarding selenium is that it supports multiple browsers. Some of them were Google Chrome, Mozilla Firefox, Opera, Safari, Microsoft Internet Explorer etc.

This command is used to define the browser that launched for testing the web application. It supports the Mozilla Firefox, Microsoft Internet Explorer and google Chrome. 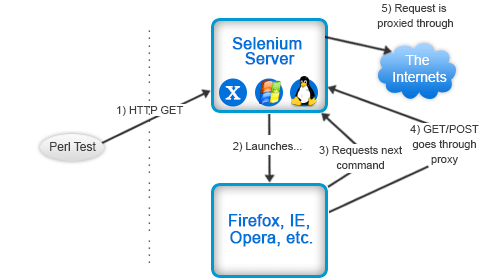 It used to provide the URL of the page that to fetched and validated.

If the application has to connect to the Internet and download web pages. It takes some time for the requested page to loaded and become available for validation. This command provides the amount of delay

There is nothing prerequisite required for learning Selenium. It’s good to have analytical skills and knowledge of some and the basic idea of troubleshooting and some knowledge of programming languages like Java, C#,  PERL and one database like MySQL. But not mandatory