Go is the latest Edition in programming Languages, that have used for Big data Designs and that referred Functions, in a group of Developers at google, who trying to Initiate language, that has low cumbersome code than C++.

Java is an Old programming Language, that verified to be one of the old Frameworks, used for Big Data Analysis, and connected ecosystems, that used by many Enterprises at present.

The best thing we get in using Java, it is stable when we compare programming languages, and easy to implement, for its production, ready in its software service or product Delivery method.

Java has been tested and Tried for Sequence of Tools, and libraries, that used for operating many operations and functions. Checking Big Data apps and software Developers, and Identifying Java to be a good and Approachable Language.

The main Drawback of this language is it is very lengthy in nature and we can do same operations in python by using 15 lines of code.

Lambda function updates have been implemented with JAVA 8, which has a small extent and Decreases the velocity.

R is the language of stats that has designed on Data models and used for data analysis in exact Quantitative Terms and conditions. This programming language comes along with big Repository like CRAN packages, and comprehensive R Archives network and it guides in getting the task, for implementing big data and using Tool Repository.

R is similar to python language, which continuously combines with Hadoop and spark with best statical and accurate data.

The main disadvantage is, it is not generic and its main concept with respect to Big Data Analysis. That explains, the courts, which written in implementing the languages, which is no more Deployable for direct production and it doesn’t have to be changed to other programming languages, which make it a time taking and more dry task.

It is one of the most versatile programming languages, that implemented on a broad spectrum that includes big data programming. Many Data analysis, libraries like SCIPy, Numpy or panda, control and cleaning of some other frameworks, which related to Big Data, are based on Python. 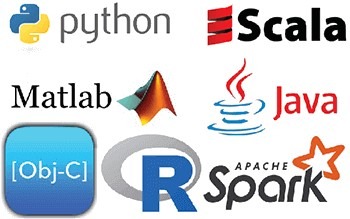 Scala is the best choice for Big data, and popular language for Professionals, who deal with big data analysis, and it is faster and more robust in Nature. The frameworks used in Scala used for processing big data. Were Apache Kafka and Spark have used as the main frameworks in Scala.

SQL is one of the popular languages, used in Big Data. It used for Querying and editing all Data that stored in a relational set of Database. It mainly used for getting and storing data.

Having SQL skills will be a big wealth for machine learning and Data science developers. Where SQL is the most preferred skillset for all organizations.

2. Which language we have to choose?

It all depends on the use case that you are willing to develop. If you concentrate on Data analysis, that which contain statistical computing, R best suits for it.

If you want to develop, certain streaming apps in Big Data, Scala is more preferred. When it comes to machine learning, for predictive big data models, we use python.

We can combine, both languages, to get a more powerful and efficient solution. For Instance, you can teach your Machine-learning sample in python. You can move it to spark, in a divided mode. Altogether, it depends on how vitally, your solution can operate. How fast it was.

Big Data analysis is a Big Deal, that covers many Functions. We have to understand, the task, that one needs to operate with Big Data set. A programmer has to recognize, what are the main values, of research that the developers undertaking.

These are the best and known facts of Big Data Programming Languages for 2020, in upcoming blogs, we will update more data on this topic.