JDBC API is nothing but a java API (Application Programming Interface) it can able to access a tabular data and stored a data in relational database. Generally an API is in the form of interfaces and collection of classes. It is used for developing java program which can communicate with data base server

An API is classified in to two types 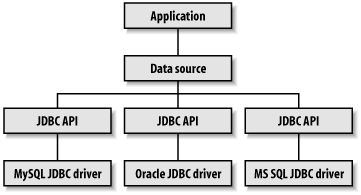 The java application connectivity to data source and source to JDBC API and finally stored in database like My SQL, Oracle, ODBC etc. During application development if we are changing the data base from oracle to My SQL. We cannot use OCI call the function and instead.

JDBC is a standard API used for developing java program which can communicate with a data base server.  An application is said to be business or enterprise if it is computerizing day to day activities of an organization. The business applications are the enterprise application will be generating huge amount of data.