With the help of Python Frameworks, developers can easily Develop exact Designs for Application Development. Automation is for the working process with frequent answers, cuts development time, and accepts Developers to concentrate, on any application logic not then the regular elements.

It is an open-source and small web framework. It Designs Web apps, as same as object-oriented programs. Especially it is an independent web application and a multi-threaded web server.

cherry py apps work on any type of operating system. It supports every python application. Not to mention there is no need for Apache for cherry py apps, we have the option to operate the cherry py app behind Apache. We can use the Python compiler for many things. 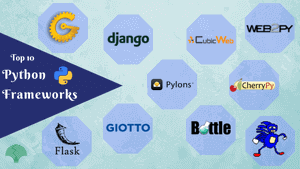 It is also a framework with a BSD license, inspired by the Sinatra Ruby framework. It depends on Jinja2template and Werkzeug WSGI toolkit. Flask came to design big and solid web apps, you can use any extensions that you need.

It is lightweight and has a nice design, which makes it adapt easily by IT-Software, it contains the best out-of-the-box features. Flask is the best python web framework.

It is a Data-driven, open-source, and full-stack web app framework. By that, you can quickly develop the best data Driven apps. It comes with an easy template and Elastic ORM.

Every Feature is Implemented in Function Decorators. It has Mochikit JavaScript library Integration. Best for command-line tools. Deals with Front-facing WSGI-based Servers and many more. It is best used for python apps.

Generally, Python 3 did not support it, and it is a full-stack open-source framework. Web2py contains Debugger, click deployment, and many more. It is Installation free and has no configuration.

In the meantime, it runs all platforms like Mac, Linux/Unix, and Google app engine. Not to mention it is a Role-based access control and it works with Internationalization. We have many python stack options to run.

As a matter of fact, it is a Microframework, used for Designing APIs. It functions everything in a single source file. As an illustration, it has no Dependencies, which are not in the Standard library. In other words If you Code with a bottle you are tied with a full-stack Framework.

Similar to all web applications and an open-source framework. Its main motto is to make applications with less work. Consequently, It works with small and large applications.

The configuration has multiple points.

It's best to work with Asset Specifications.

It is best for authorization and authentication.

Generally, I designed on UV loop and specially designed for HTTP responses with the help of request handling and many more. It best works on Python 3.5 functions. Specifically, it updates its speed by producing Non-blocking capabilities.

As an illustration, it is a web Framework with the best networking library. It makes use of a non-blocking network, which is I/O and it solves the C10 k problem. This makes it the best tool for designing apps.

Open-source Framework and Implemented for Designing Analytical Web apps. It is the best option for Data scientists, who don’t know web development. To enumerate Dash Apps are nothing but the best web servers. That operates flask and Interact with JSON packets on HTTPS Requests and front end components with Reactjs.

Generally, Talk is that Django is the best open source Framework. In the same fashion, it tries to include required features by inbuilt. Most Important it provides Separate libraries.

While this may be true, With the result Some special Features of Django are authentication, database, Schema migrations, object-relational mapper, template engine, URL routing, and many more.

For example, Django makes use of ORM to route objects for Database tables. As usual, the same code works with different databases, it is very critical to transfer from one database to another database. Simultaneously the main Database, that python Django works is Oracle, SQLite, MySQL, and PostgreSQL.

Not to mention Logilab developed it, as usual, it's an Open source, free to use web framework. As a result, it's based on the Data model and in this application. you have to define a data model for getting a Data application.

As an illustration, it makes use of a cube, and it separates models and views. To illustrate Many cubes joined in a combined way to design an example, with the guidance of configuration files that is just like a Database and web server. Best used for python web development.

There are some other frameworks also available that help in web app development. These frameworks are as follows:

This is one of the Python frameworks built upon asyncio and inspired by the NodeJs and other frameworks. Here, the request sent to it is not directly handled but it deals through middleware technology. It is more suitable to implement complement more complex apps easily.

Further, this framework supports a group of free packages. It uses a decorator for writing, cleaning, and code reusability. Also, it enables this decorator to minimize the code complexity and makes it reusable.

This python framework is also a popular, full-stack framework and based on the MVC model. Further, this is an application framework and isolates the MVC elements in order. This framework also comes with a controller module that provides a platform for developers. It helps them to build various apps using command lines & IRC charts. Also, it makes the tasks easier for the developers.

This is another micro-framework widely useful in developing web APIs. The framework needs many dependencies for creating HTTP APIs. It also allows a developer to build cleaner designs that allow HTTP and REST architecture.

Most giant enterprises like OpenStack, LinkedIn, etc. uses this framework effectively. Also, it offers additional speed through Cython support. Then it also provides error responses to the native HTTP. It uses very low memory along with an autoloader mechanism.

This is also another famous framework useful to build APIs. It also offers developers a few API versions and automatic validation. Moreover, the compilation from Cython makes its influence on performance much better. It also can serve as a library for you.

Eve is another famous framework useful for beginners to build APIs much faster and easier. Also, it uses the Flash framework for the web setup. So the new persons entering the Python world can easily understand this framework.

In this way, we can explore many frameworks under this famous coding language for web growth. Apps and their growth depend upon the usage of tools and techniques we use. There is a lot to know about these things which will give you more practical knowledge through online education. I hope you have got enough knowledge of these frameworks and their uses.

Thus, we can see there are many frameworks for this famous object-oriented coding language. The collection of various libraries and frameworks makes it a much popular one for building web apps. And automating the application. It is the most famous language and extensively useful because it is user-friendly and easy to understand. It has extensive library support, free availability, flexibility to integrate, etc. Very simple to learn a language for newbies and other experts who want to change their career. With or without coding knowledge also can start learning this program as it uses very simple syntax.

Moreover, it supports web app growth much better to build scalable and efficient apps. Also, has the capability to hold both frontend and backend coding contents. Therefore, many web developers prefer this language more for app growth. Get the latest updates by joining the program.

If you’re also one of them who wants to explore app development in detail, get into the Python Online Course with the ITGuru platform. This live training will give you the overall idea about this language in real-time through expert guidance. You can also enhance your existing skills to enter into the giant IT world. This will help you explore career ways.

I completed my blog on various types of Python Frameworks. If you have any doubts, Go through our OnlineITGuru Python Tutorial.

What is Seaborn in Python programming?