Common Gateway Interface or Python CGI is a set of Terms and Conditions that Explains, how Data is transferred between a Script and Webserver. This Interface accepts a web browser to send an Input and Output of Python Programs to a web browser. Designing a web interface is similar to designing a GUI.

CGI is a protocol for web servers to deliver an output of console apps, known as a Command-line Interface. A CGI script is like a Python Script that is similar to a PERL script, shell script, or C-programming.

In this programming concept, an HTTP server appeals to a Python CGI Code. So we can process a user Input, with an HTML

This script stays at the CGI-bin directory. For any requests, the server sends the Data about it, with the client's Hostname. Similarly, Suggested URL, query-string, and other Data in Script shell location. It compiles the code and transfers the output to the user. 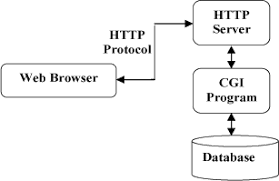 The input of the code communicates with the user, and Server in some cases and it reads the data in this way. In some other cases, it sends requested data with a Query string, with the section of the URL. A Query has data, that do not fit in the Architectural path.

Python libraries and CGI modules manage the Situations and Guide the Debugging Scripts. Therefore, we can expect a Python CGI script output. It supports Debug scripts. The present version gives us support for uploading Documents.

The above First statement explains the server that HTML code allows. The second, one shows the HTML. This will help the software Display format text.

This variable used for making a Request, with a POST or GET.

When you define an IP Address for a visitor, then you can implement the application of the variable.

For defining a path, it is used in CGI Script.

The hostname of the visitor can be defined.

If you want a check, the View of a browser used by a user, then this variable is applied.

At some point, a user has to implement a cookie, consequently, it is used to change the same.

To know the Length of a Query or Data, this variable is used.

Consequently, For Describing Data and Type of content, the variable CONTENT_TYPE is used.

3.The functions of CGI Programming:

Escape change characters ‘<’, ‘>’, ‘&’ in the string ‘s’ to an HTML Sequences. If you show the text that holds some characters, that you implement in HTML.

The above function Prints the sequence of all variables in HTML.

This helps in formatting the present Directory in HTML.

with the help of the above function, it formats a form in HTML.

This formats the shell dashboard in HTML.

It is like a test CGI script, and moreover, we can implement it like the main program. It will script minimum HTTP headers and some format types.

This function formats the Shell location in HTML.

Generally, this function is like a test CGI script, and we can implement it as the main concept.

parse_header() pass a MIME header into the main value and into Index Formats.

This is the appealed one and it handled for back computability, by that you may implement urllib.parse.parse_qsl().

Since this is the object, python handles it with more compatibility, moreover, we can use urlib.parse.parse_qs().

Generally, this parses a Query in the placement, we can implement it for making a file, the default for which is like a sys.stdin.

1. Find who is running the web-server.

2. Check the server configuration, to see if you can run the scripts in some section of the Directory in the same way.

3. Similarly, You have to check the file permission.

4. Moreover, You can Design clean assurance and Scripts that you can read and execute, in the webserver.

5. Especially, Confirm that Python Scripts refer to web server, where the Interpreter can run.

Python 3.8.1 has come with Library updates, like importlib.metadata, which synchronized with import_metadata 1.3.importlib.metadata. In the same fashion, the error of path-lib crashing os.link(), missed and updated.

Already we have given the structural image of the CGI architecture above in this blog. Let us understand this architecture in brief.

While the webserver gets requests from the client-server the common GI uses external files and codes to manage those requests. Later, these programs go back to any coding language like Python. But the main aim of this project is to recover data from the existing DBs. And the data recovered from that DB need to modify into an HTML form and sends back to the server.

There are different benefits of using Python CGI programming and a few of them are as follows.:-

CGI programs are independent and these are useful with any coding language such as Python CGI.

These programs are capable of working on any web server and are portable too.

The Python CGI coding is capable of executing any type of task either simple or complex. Hence, they are highly scalable to perform.

Moreover, these CGI programs can enhance the dynamic contact between the web apps easily.

Also, Python CGI (s) can give much profitability through its use in development. They help users by minimizing the development and maintenance costs.

Along with many advantages, there are a few cons of using CGI programs. These cons of CGI are as follows:-

They are very complex and also hard to debug.

Generally, these CGI programs may take a long time to process.

Also, while loading a page, the data may not store within the cache memory in CGI.

Further, it has a large and extensive codebase also.

They also prone to vulnerability as most of the CGIs are free available without server security.

Typically, the Python library includes two different modules for CGI support. The CGI module here describes the number of utilities that a Python CGI script will use. The “cgitb” module in this module support is a traceback manager for entire CGI scripts useful. Usually, both modules need to import within a Python script in this regard. This is through allowing the traceback feature.

Further, the client browser, using the HTTP protocol, will interact with the webserver. Now, the HTTP requests need to send to a server URL either through the get or post methods. Here, the get method sends the data from the client-server in an unencrypted format. In this regard, it is very unsafe. It may include any malicious or hacking data that harms the system. On the other side, the post method is useful to send the data in an HTML format of the client. Hence, this HTTP header includes an encrypted data form.

The Python CGI module also describes a “FieldStorage” class. Thus, the data received from client requests are collected and stored within the “FieldStorage” object. Also, this is the same as Python's dictionary object that includes form elements and their respective values. Moreover, once the object recovers the form data on the server-side. The Python CGI script can execute the process needed and provide the HTML output in return to the client browser.

Hence, this all about Python CGI programming and its uses and benefits. This is a gateway interface that explains the way of data transfer between the Script and the Webserver. There are many uses of CGI programming due to its independent nature with fair scalability. There is also consistent portability that helps them working on any webserver easily and smoothly. To get more idea on Python and CGI go through the Python Online Course with OnlineITGuru. The industry experts and mentors will also guide you in this regard to achieve professional excellence in Python programming.

Finally, these are the best-known facts about, python CGI programming. We can implement many concepts with this programming model, and further, we will update in the upcoming Blogs.