What are the updates & features of Ruby on Rails 6?

Ruby on Rails is a famous web-application framework that helps developers to build websites easily without drawing many codes. The latest version Rails 6 that has many updates and changes. Moreover, it is to be noted that Rails 6 is supported by Ruby 2.5. So, we need to upgrade to this version.

It needs to make sure that the Ruby version is compatible with the change that comes with Rails 6. It requires the minimum Ruby version to upgrade it to the latest one. Moreover, Rails 5 required the minimum version of Ruby 2.2.2, while Rails 6 needs to upgrade to Ruby 2.5.0 or higher.

It also requires updating Gemfile for Rails 6 version to make it compatible to use. It’s time to update the Rails version within the Gemfile. By running the bundle update Rails command in the terminal to update Rails and other dependent Gems, it will update to the latest version.

Later, we need to run the Rails app: update within the terminal. Besides, by running the above command; we can get some new configuration settings that are added to the application. Moreover, after upgrading to the latest version, we need to check the version by running and fixing the TestCases.

The need for the change to the Ruby on Rails version Rails 6 gives the following benefits.

New tools are added: The latest tools and features like Action text, Action mailbox, testing updates, multiple DB, and many more. These latest features will be useful in the future.

Gem updates: Ruby on Rails is not the only gem that receives the latest features. In the latest time gems might adopt updated features that are dependent on Rails 6.

Makes future upgrades easier: The older Ruby on Rails application is the harder and needs to upgrade. The upgrade is useful so that future developers may get huge benefits.

Webpack: The official webpack will replace the existing asset pipeline after the upgrade.

Bug fixing: Bugs and errors always disturb our work. Even the most advanced technology has to face these bugs in its lifetime. But Ruby on Rails 6 version has no exceptions in this regard. It detects such bugs and errors and fixes them to diagnose. 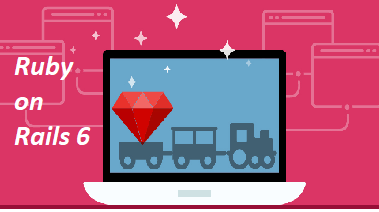 The Action Mailbox is the latest framework that directs incoming emails to the controller-like mailboxes in Ruby on Rails. This allows Rails 6 applications to integrate with incoming emails better. Moreover, the Action Mailbox requires Active Storage and Job for its operation and the features include Mailgun, Postmark, Mandrill, etc. It helps to directly processing mails from a help desk to automate various support tickets. This version allows its customers to reply directly to the inbound mails through email and much more.

The following example will help to know the usage of Action Mailbox.

This is the second major update and latest framework in Rails 6. The Action Text is going to make writing, editing, and visualizing text in a Rails application very easy or will take it to the next level. Moreover, the Action Text consists of the TRIX editor that handles the following:

These content or images are stored in Active Storage in the framework. Thus, the Action Text brings in rich text content and editing opportunities. Besides, it is already working with the previous versions of Ruby on Rails.

To make the application connect and switch between multiple databases at the same time for better scalability or performance reasons, it needs to upgrade.  The latest version of Ruby on Rails helps in this regard very much.

Moreover, configuring a database using a master-slave scheme is a typical task. Here, the database is replicated across multiple servers using the master node receiving all writing operations. Later, these are processed through slave servers. To meet all these purposes, Rails 6 provides an API for MD support. This enables the users to do it without getting deep into Active Record or storage.

For example, we can see that the existing version of the database.yml may look like:

Using Rails 6 users can add a replica for their primary database. Moreover, they also can add a new and updated database by updating the database.yml with the following:

To use a read-only database within the application user needs to configure the middleware to connect through automatic switching. The automatic connection switching allows the user application to switch between primary and replica databases. Moreover, this is based on the HTTP request method.

The Rails 6 version adds a parallel test to the Rails applications as a default. Like multiple database support, parallel testing is a type of function. This is might be useful while running typical tests for the application. Moreover, it adds an advantage to the multiple cores of the system. This parallel testing support helps to speed up the testing suite. Besides, each testing worker gets his database and runs its thread across the application. This feature is among the best and the popular ones in Rails 6 within Ruby on Rails.

There may be a requirement for us where we need to insert several records at a time and have found many issues/limitations while doing so. However, Rails 6 application comes with the latest method such as- insert_all, similar to update_all.

This will execute a single SQL query only. Similarly, there is another option- upsert_all. This option allows users to do upsert activities in their tasks. Thus, using these options users can minimize their insert queries and make their code more optimized.

Using these methods and options, users can prepare a single INSERT SQL query and a single SQL statement is sent to the database. This happens without any model instance or citing Active Record callbacks and validations. Here, it’s possible to explain the standard when a primary key—“unique indexes or unique limitations are violated having an option to either skip or run “upsert” queries.

Here, we will know about the data seeding. The below statement will help to truncate the database tables and the user can proceed to seed his data.

Now, using this facility, users don’t need to remove their databases for data seeding. This will be a quick solution user may find.

The latest version Rails 6 includes a new method that is useful to prevent the Insert/Select race conditions within the code.

To define this, the table underlying must have the relevant columns having unique limitations. When users shun the race condition between “SELECT -> INSERT” from #find_or_create_by, option, then they actually have another race condition between “INSERT -> SELECT”. This can be activated if the client runs the “DELETE” option between those two statements. But most applications may less to hit this option notably.

There is an upgrade inactive storage feature of Ruby on Rails 6. This feature helps developers to store files allotted to a particular record to store immediately without any issue.

This may be a great feature in Rails 6 update where users can easily test “Action Cables” for different functionalities and at any level. This consists of the following features;

Channels- It maintains the channel’s subscribers to a specific stream.

Connections- This feature tests whether the connections identifiers are properly allotted.

Broadcast- It checks whether the message has been transmitted within other components or not.

On the basis of the above details on updates, we can say that Rails 6 framework helps the users very much. It improves the process of common development tasks faster and easier. This is also very significant for its extensive usage of JavaScript libraries, prototypes, etc. for agile actions. It could be definitely the best solution for the business world in performing certain actions.

It became a power-packed solution for the business needs with the latest updates and there are still upcoming.

Webpack as a default

With the latest update in Rails 6, the webpack is going to be a default JavaScript bundler for Rails. This replaces the previous-default Rails Asset Pipeline through the webpacker gem. Moreover, replacing it provides for better operability with modern JavaScript libraries and coding. The webpacker is a gem that provides integration between webpack and JS packages such as YARN.

Zeitwerk is the latest code loader for Ruby on Rails. It’s a conventional file structure. Moreover, the Zeitwerk loads the project classes and modules on demand by the users. It means the user doesn’t need to write the necessary calls require for their files. It can overcome the limitations that a traditional loader generally has. This can; Autoload code, Eager Load code, Reload code, and can also work with both applications and gems. Thus, it makes it robust to perform better for achieving results. Moreover, this is built with the intention to eliminate all known use cases of a classic loader.

Since the Rails 5.2, credentials were famous; the new “Rails way” deals with sensitive information. By using these credentials, encrypted keys for third-party services can be tested directly through source control.

What is the use of Ruby on Rails 6?

There are many reasons to use the Rails 6 version of this framework. Earlier Ruby on Rails was very slow in running. But Ruby is now a much-matured language with lots of updates. Rails 6 app is also getting popularity around the globe.

The survey regarding Ruby language says that it is the 6th most highly paid language worldwide.

It includes many useful tools and gems with updates that help to build dynamic web apps much faster.

Moreover, it also includes a great community that helps to resolve any developer’s problem in very little time.

This rails 6 application brings some easy techniques for the users to scale their application natively. There are many big players on this globe that use this application for their operations.

Besides, the Ruby language continuously updates with lots of new features that allow developers, and users to use it smoothly.

There are more updates to come down on Rails 6 and further versions. Stay tuned for the updates.

Get practical experience of learning Rails 6 by getting into Ruby on Rails Online Training from the industry experts. Learning from OnlineITGuru may help to enhance skills and knowledge on Rails with a plan towards a better future.