There is no end for some phrases to be written. One such phrase is NECESSITY IS THE MOTHER OF INVENTION. Today scientists do not invent anything without the need?  Hence prior to knowing about the serialization in python, let us initially know

Why do we need serialization?

Data is the biggest gift that the internet has given to the people these days. This data plays a major role in the analysis of the business.  Some companies get data from their previous traffic. While the other approach some other third parties for the data.  Moreover, in these modern days, it is not possible for all people to work at the same place. Hence these people make use of the internet to transfer data from one place to another. But it takes a lot of time on the internet to transfer the actual data from one place to the other.

So in order to send the same amount of data, people use some techniques to transfer from one place to the other in a short span of time. Moreover, with this technique, people can send data through the internet at a low weight. As mentioned above, there are many ways to send data over the internet. One such way is Serialization.

So  I hope you people have got enough idea of the need for serialization, now lets us move forward to

Serialization is the process of converting the object (or) data into some other format where they can be stored and retrieved later. Since the data is transformed and stored in another format,  it allows the features of restoring and deserializing the data from the serialized form. Besides the data conversion, this serialization also allows us to reduce the data size. Hence this data gets fit in the given data storage (or) the bandwidth. 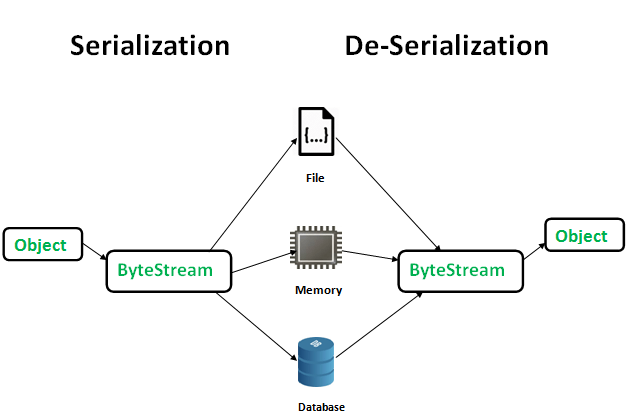 So I hope you people have got enough idea regarding the serialization, let us move forward with

Module interface for Picking and Unpicking:

In the pickle module, data is python specific. Hence, it is important to write the essential code, while performing the serializing and deserializing.  For the purpose of serialization, these programming languages use dumps () and for deserialization, it uses loads(). Through picking, we can convert the python object hierarchy to the binary format that can be stored.  And in order to pickle the object, we need to import the pickle module and call the dumps function. And this utilizes the object to pickled as the parameter.

If you observe the above code,  we have created an instance for the sheep class and then transforming this in the array of bytes. Moreover, we people can easily store this bytes array on the binary file (or) in the database field. And we can restore this file any time, as per the requirement

As mentioned above, since the python data is python specific, it does not impose any restriction on the external data like JSON (or) XDR. But this makes the inability for the non -python programs to reconstruct the picked python objects.

And for the purpose of pickling, it uses several different protocols, let us discuss, one by one in details

python has five different versions for the purpose of pickling. They are:

a) Protocol Version '0':  It the original as well as the human-readable protocol. It is backward compactable and supports the earlier version of python.

b)Protocol Version 1: This is an old binary format. This format is compactable with the earlier version of python

c)Protocol Version 2: This version is added in python 2.3. And it provides more efficient pickling of new-style-classes.

d)Protocol Version 3: This version is introduced in Python 3.0.  This version supports byte objects and cannot be unpickled by Python 2.x. This protocol version suits best at the time of the compatibility of other python versions.

But in order to serialize the data using the fundamental objects of data in python, I personally suggest you utilize the marshal module. This module supports the function to read and write the python value into the binary format. So let us discuss briefly Marshal

This Marshal module provides the feature of object serialization that is similar to that of the pickle module. Even though this module does not provide support for the data maintenance and the transmission of the objects, it supports the interpreter to perform read and write operations to the compiled version of the python modules. Some people call this marshal module as internal object serialization. And this is so-called due to the varying data format usage. This module defines the load() and dumps () functions to read and write the marshaled objects

dump(): It supports the objects with standard data types. While marshaling these python objects, it returns a similar byte object

loads(): By using this function, one can convert a byte object to the python object.  And if the conversion fails to provide the required python object, it returns the  TypeError (or) the ValueError.

How Pickling is beneficial?

If an application requires a minimal amount of data persistency, then pickling suits best. This picking helps in saving the data on the disk.  Moreover, this picking is the best option while working with objects related to machine learning. Since this model does not require any rewrites, this model suits best w.r.t time management.

Where pickling can be applied?

This picking can be applied to different data types. These data types include boolean, integers, floats, complex numbers, and so on.  But anyway in order to pickle any datatypes, it is essential to pickle the functions as well as the classes.  Moreover, this pickling is python specific, we cannot use this across the different programming languages. Besides the file executed in the python version is not compactable to execute with the other python versions.

Here, JSON refers to the JavaScript Object Notation and is a part of Python libraries and also a useful format for serialization and deserialization. It’s a text-based format similar to Pickle and a lightweight format popular for data interchanging. Although, the JSON module under the Python standard library helps in Serializing various Python objects into JSON format.

There are two different methods in this module for performing serialization in this coding language. Such as dumps(), loads(), dump(), and load(). Hence, using these functions, we can perform Serialization easily to and from a file. It also helps to read and write the objects easily.

Let us see the usage of these JSON functions.

dumps()- This function helps us to convert the Python object file into a JSON file format.

Loads()- This function helps us to convert the JSON string file back to the Python object.

dump()- This function encodes the String writing upon a file.

load()- The function load()decodes while reading the JSON file.

Moreover, there are two more JSON modules categorized into different classes such as JSON Encoder and JSON Decoder.

What is JSON Encoder?

The JSONEncoder helps in encoding the data structures within Python. The serialization is done through the JSON encoder class conversions in Python to the respective JSON format. Such as-

In the serialization process, the JSON module converts the Python’s “dict” object into the JSON “objects”.

“Str” in python is converted to JSON String type.

The Boolean value “True” in Python is transformed into JSON constant “true” value.

The value “None” refers to “null” in Python language and the same is converted into JSON format “null”.

Similarly, the “Int” value type is get converted into the JSON format “number”.

The JSONDecoder helps in Decoding the JSON string file back to the Python data type. The following example explains the decoding system.

Hence, JSON format is most suitable for data serialization in Python as it is compatible with any coding language. Also, it offers a human-readable syntax which is much easier and simple to read. Moreover, it offers support for the nested data structures and various other types of data.

YAML or YAML Ain’t Markup Language may be the most human-readable data serialization language for standard programming languages.

Moreover, “pyaml” is another name for the YAML module in Python.

However, we can say that YAML is an alternative to JSON format in data serialization −

Hence, YAML is an easy-to-use human-readable format. Also, its front-page content is presentable in YAML format to clear this point.

The syntax structure useful in internal references are anchors (&) and aliases (*).

In YAML format generally use whitespace hollow to mention the structure, but not brackets.

The areas that we use widely for viewing or editing data structures are configuration files, dumping while we debug, and document headers.

Benefits of JSON serialization in Python

There are many uses and benefits of JSON serialization in the Python coding language. These are as follows-

It helps to move back easily between the JSON value and the container such as Python to JSON & vice-versa.

JSON is generally useful in web apps to transmit data between the server and the client.

Further, it is a built-in module within the Python standard library that helps in serialization and deserializing the objects.

Also, it is widely useful in handling complex data.

Moreover, it doesn’t include the same data structure or type within a single file.

Thus, the process of serialization in this language converts the object state or data type into a storable format. Later, we can also restore it within the same or another computer system.

The process also has another name marshaling or deflating an object. But the deserialization is quite its opposite. All this runs around the pickle module and JSON module within Python language. Both are very useful modules in this process. But in the pickle module, there are some limitations as it doesn’t serialize every Python data structure. It also modified many times the new data add to Python language. Also, it is Python-supportive, so there is no reason for supporting other languages.

Each concept has some pros and cons. Besides the cons, this serialization is the best practice that simplifies the storage of the data scientist.  And many developers today inform that it is one of the best features to implement the data conversation. In simple words, these picking and unpickling are the best ways to transform the data. And you people can the practical knowledge of this serialization from live industry experts at python online training