Java is basically an OOP programming language like C, C++, etc. but with some advanced features. This was developed and designed by James Gosling and the team in early 1995. Java programming includes many features like concurrent, dynamic, multithread, secured, etc. that make it easy to use.

Moreover, another great feature that this coding language involves is that its “Platform independence”. Java programming is an application development platform with lesser implementation dependencies. That’s why many users use it for developing dynamic apps for various devices. Like laptops, mobile phones, data centers, and other useful gadgets.

Similarly, the Java platform is a collection of various programs that developers use to develop & run its apps effectively. This platform involves a compiler, a library set, and an execution engine to perform well.

There are many uses of apps within this programming language. Such as;-

Programming for hardware devices and gadgets

It is also useful for many server-side technologies.

These are some of the features and uses of this language that we are familiar with. But there are some other advantages also of using this coding platform. Let us move on further in this blog regarding the platform independence feature of this programming language.

Before going in-depth in this subject, we should know why Java programming is platform-independent? 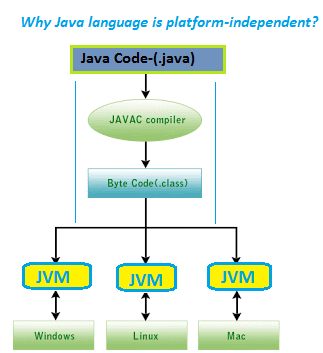 What is platform-independent in Java?

In simple terms, the meaning of “platform-independent” refers to the software that can run on different platforms. These may be either hardware or software architectures. Moreover, Java programming is designed to run on multiple platforms and on operating systems also. There is a JRE/Runtime Environment within it which is a platform for this programming language.

While compiling Java programs using the javac compiler, it produces a unique Bytecode to run on various operating systems. This code is unlike other programming languages. Generally, the byte code produced by this language needs JVM (Java Virtual Machine) only. Here, the compiler only generates executable code for a specific machine.

When the Java program runs on any machine, then it is sent to the Java compiler where it converts it to byte code. Besides, this code is sent to JVM that stays within the RAM of an OS. Thus, JVM identifies the platform that it’s running on and converts it into the native machine language. Therefore, we can say that this is a platform-independent programming language.

But the JVM or Java Virtual Machine is a platform-dependent here.

Get more knowledge on this most useful coding language by going through the Java Online Course at Onlineitguru. Learn everything in a practical way about this coding language and its uses.

A brief about Platform

A platform is a combination of software and hardware that offers the ecosystem to run any program. It can run on any computer system and an operating system too. These operating systems can be Windows, Mac, Linux, etc. Moreover, to run a program it needs to convert the program into machine language using a code. Then, we can run the program easily.

Describing the process in detail

Basically, a program is written in a high-level language (HLL) (i.e. human-readable language) that includes many phrases, words, etc. And this cannot be understood by a machine in a general form. Therefore, it needs to be converted into a machine level language (MLL). The compiler makes it possible. Besides, the compiler is a kind of program that transforms the code from High-level (or coding language) to machine level language. This code or script can be a series of instructions that are directly performed by the CPU or can be sent to the JVM or Virtual Machine.

What happens in Java comparing to other languages?

As we have discussed above the Java compiler converts the code to Bytecode to execute it on any other OS. Moreover, there are some other features that help it become platform-independent. These important and very useful features are as follows;-

This refers to it has the ability to perform multiple tasks at a time. Due to multithread functionality, it executes different tasks in parallel. The feature helps to save time, memory, and resources too. Again, the same memory and resources are used by different threads running parallel.

There are a few OOP concepts of this coding platform such as;

The object class within OOP is logical as well as a physical entity. This entity includes a state and behavior such as anything like a chair, pen, table, motorbike, etc. Moreover, the object has three different features such as identity, state, and behavior.

Besides, the object is a real-world entity with runtime, state, behavior, and instance of a class.

A class within this OOP concept of the Java language is a group of various objects having coming properties. Furthermore, this is a logical entity and it cannot be physical. The common things that a class includes within this coding language are; - fields, blocks, methods, nested class & inheritance, and constructors. All these have their respective advantages and uses.

This is the process of combining code and data together into one unit similarly like a capsule we see. Java language offers us to build a fully encapsulated class by making the class members private. The “Java Bean” is the best example of the encapsulation process. Besides, there are some useful benefits to this process also. Such as; we can make a read or write-only class, we can have control over the data, data hiding, etc. Further, there are easy testing options in this class. Also, there are standard IDE’s that help to build easy & fast encapsulated classes in this coding language.

Inheritance is a type of mechanism where a single object obtains all the properties and characters of a parent object. Therefore, it’s a major part of the OOP concept. The best use of this mechanism is for method overriding and code reusability. Moreover, the idea behind the inheritance in OOP is to build new classes upon existing classes. There are some important terms that we use in the inheritance like- class, superclass, subclass, and reusability.

The process refers to “many forms” and it appears when there are many classes linked with each other by inheritance. It performs a single action in many different ways. Moreover, there are two different types of Polymorphism in this language such as compile-time and runtime. Here, the runtime method is a process where a call to the overridden method is solved at runtime. The example of the compile-time method includes the overloading of a static method in this coding language.

The problem that comes with every software coding or compiling is its security which is crucial. But when we come to the Java language, it’s a highly secure language among others. The way it executes its programs make itself and the system very secure. Moreover, it mostly runs on JRE or Java Runtime Environment with the OS that makes it more secure.

Coming to performance it’s very good and effective due to having JIT- Just-in-Time system. The JIT compiler usage makes it a high-performance language among others.

Simple to understand and use

The programming language Java is very easy and simple to use but one should know about the OOP concept within it. This concept helps to understand this language well.

JRE is a type of software layer that helps to run other software easily. This includes many things like libraries, JVM, loaders of classes, etc. It also includes various tools for development like a compiler, debugger, etc. There are some package classes also within this.  It is one of the three interlinked components useful for developing and running Java programs. They are JDK and JVM.

JVM machine executes the live apps of this coding language. Further, it stores the following information within the method area.

It stores whether .class file is linked to Class or any Interface

The reason to use JVM here is that-

Once the Java program runs, users can run it on any platform and it also saves lots of time.

Moreover, JVM includes a JIT compiler that changes the source code into low-level machine language. Further, it runs faster and robustly than a regular app.

Hence, these are a few uses of JVM.

There are a few types of platforms in this programming language. These are as follows;-

Here, the API provides this coding language’s major functionality. This edition describes the base for all the types and objects to a high-level class. Moreover, this is mostly useful for security, networking, database access, etc.

This EE edition also offers an API and runtime environment for various purposes. Such as building and running large scale apps, multi-tiered, and most reliable applications, etc.

The ME edition platform provides an API and a piece of VM running this coding language apps on small devices, like cell phones.

This is a platform useful for developing rich internet apps with the help of a lightweight UI-API. It includes user hardware-based graphics or GUI and media that help it take benefit of higher-performance clients. And it also provides a good/modern look and high-level APIs for linking to networked data sources.

Requirements to run the Java program

There are some pre-requirements to run a Java program on a native system. Here, we need JDK or Java Development Kit to develop any kind of application in this platform and implement it well. The JDK is enough to install the required software efficiently.

And other tools and libraries that are important.

The overall information about the Java programming language’s platform independence gives us an idea about the byte code, JVM, etc. We learned about how this programming language can be platform-independent. The process explains the usage of Java language on different platforms and in building apps. To learn more on this concept in a practical way from experts’ view, go through the Java Online Training with industry experts.